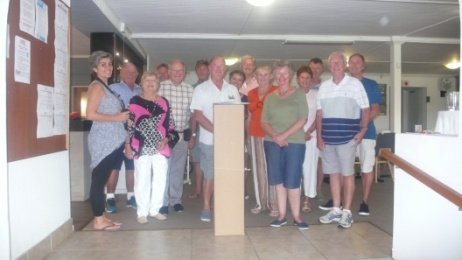 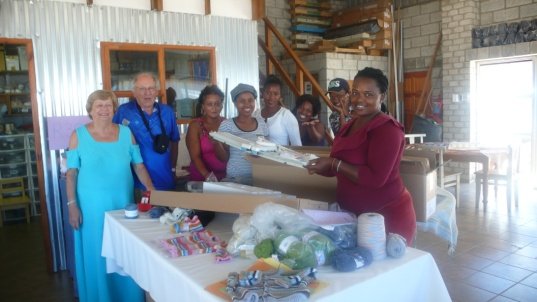 Nomvula’s Knitters is a local community project helped by Poynton Rotary.  They are situated in the village of St Francis Bay in South Africa. It is known as an affluent holiday village on the Indian Ocean about 100km west of Port Elizabeth. It is a popular holiday resort for people, in particular, from the Johannesburg area many of whom have second homes in the village. The residential population of St Francis Bay is about 3,000 but this swells to 30,000 at the Christmas holiday time.

Behind, and out of view of, the affluent sea frontage is the disadvantaged township of Sea Vista where employment is very scarce and there are social problems associated with HIV Aids and tuberculosis, substance abuse and domestic violence. Most of the Sea Vista community rely on the very few seasonal fishing and tourism opportunities for any sort of income.

Nomvula’s Knitters was started as an initiative in 2008 by Rotarian Frances Becker of St Francis Bay Rotary Club. Her intention was to create employment for the disadvantaged people of Sea Vista township in such a way that that would eventually empower them to take over and run the enterprise as their own business. The concept of the company is to train the knitters in the art of manufacturing, marketing and running a business with a goal eventually to own a business. However, they now have the problem that their existing knitting machines are old and it is difficult to maintain the quality demanded by their customers.

John Bissell is a member of the Poynton Rotary Club. He and his wife visit their daughter and family who live in St Francis Bay. Thus there has been an opportunity for the Poynton Club to directly assist the Nomvulas Knitters by sending them new knitting machines.

Poynton Rotary Club initially purchased the first knitting machine a few years ago. In total 4 machines have been purchased and taken out to South Africa, during trips to see family.

The Nomvula’s Knitters were absolutely delighted that they could now be even more productive and raise more funds themselves. 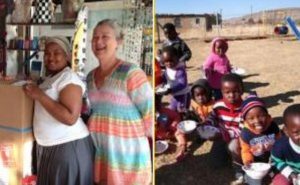