Following the great success of Poynton Rotary’s Party in the Park on Saturday 15th June 2019, we would like to thank all the Volunteers and Poynton Groups who gave so generously of their time and effort. People have been working hard over the past year to bring this event to fruition. 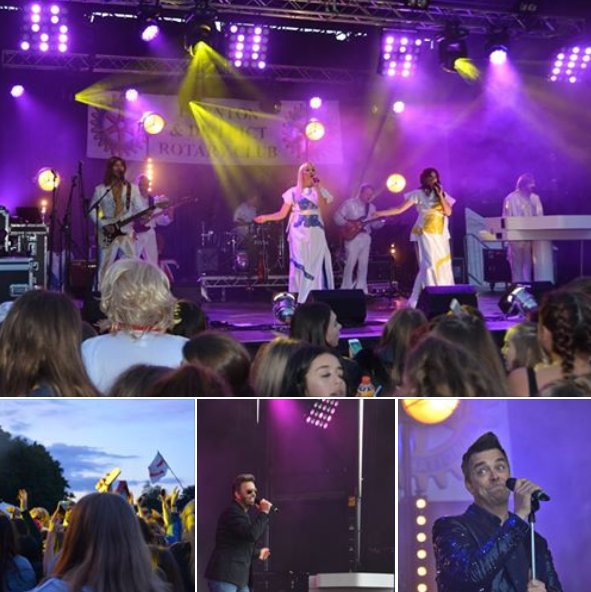 This year’s charity musical extravaganza provided 6+ hours of sensational live music for all tastes.    We started off at 4pm with a showcase of young talent from Poynton, whilst you enjoy your food and drink hampers. This was followed by Poynton’s award winning  Vernon Brass Band, who have been with us every year since the event started in 2004.

Next we had Paul Grant Reason performing an amazing tribute to George Michael.    Back again by popular demand were Monkey Harris who we knew would have  everybody on their feet dancing.  An hour later Paul Grant Reason transformed and lost his bristles in order to perform an incredible award winning tribute act to Robbie Williams.

Top of the bill this year was an incredible tribute band called Waterloo. The clue is in the name – they are considered the best ABBA tribute band. Take a look at our YouTube video and see them in action.  Last but definitely not least was our very own Leroy Lurve who compèred the whole show.

Unfortunately early in the afternoon we had a heavy downpour of rain and many of our volunteers were soaked to the skin! Not long later, we were rewarded with completely dry sunny weather all evening and really great entertainment!

Thank you again for all your many hours of work on behalf of the Poynton community and the supported charities.