Last year, the 2018 charity musical extravaganza was held on 16th June 2018 and proved to be even bigger and better, with 6+ hours of sensational live music for all tastes. See the video and programme.

LATEST NEWS – This year’s event (2019) will be held on Saturday, 15th June 2019. We have a fabulous line up of entertainment. Please check out Tickets & Show, for all the details. We recommend purchasing tickets early for the greatest savings. 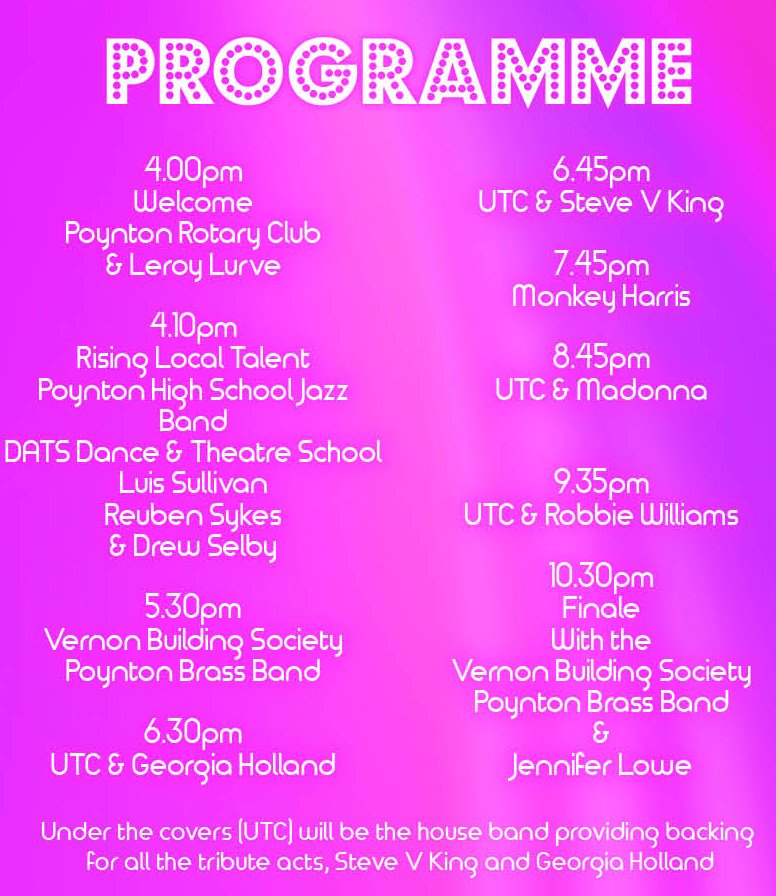 Last year (2018), we booked two of the most exciting tribute acts around, Tasha Leaper as Madonna and Lee Pashley as Robbie Williams. Both performers have the looks, voice and moves, and we know will deliver captivating performances.  We were also delighted to welcome back Steve V King. Formally of the official Drifters line up, Steve sang a host of gems from the Motown and Soul era.  Supporting the line-up was the highly talented ‘Under the Covers‘ band who were top of the bill in 2015.

Back again by popular demand were Monkey Harris who got everybody on their feet dancing.  Again we had the fabulous Georgia Holland, and this year soprano Jennifer Lowe.  We had Poynton’s prize winning VBS Brass Band who have performed at every Party In The Park event from the very start in 2006.  Also at the start some rising stars – Luis Sullivan supported by Rueben Sykes and Drew Selby, also Poynton Jazz Band and DATS dance group.

Last but not least our very own Leroy Lurve who compéred the whole show with performers on stage one hour earlier than previous years from 4pm.

To supplement your own party picnic, we had a number of food and drink vendors arranged, including a Drinks Bar,  The Coffee Pot,  Whippy Ice Cream,  Spud Van,  Wildfire Pizzas, Cyprus Kouzina,  Sugar Donuts.  For the children there was a Face Painting tent, which proved VERY popular indeed with children and grown-ups.